Just read this on cbc.ca:

A controversial Alberta bill will enshrine into law the rights of parents to pull their children out of classes discussing the topics of evolution and homosexuality.

And people wonder why Alberta is seen as a redneck province??

Of course not everyone in Alberta buys in to nonsense like this. But when the government makes such legislation it doesn't do much for the image of the province
Posted by Gord at 5:42 pm 2 comments:

Email ThisBlogThis!Share to TwitterShare to FacebookShare to Pinterest
Labels: In the News

Last week was woundedness. One of the recurring images in the Easter story is that the Risen Christ bears the wounds of crucifixion. And those of us who follow a resurrection faith bear the wounds and scars of our lives with us. Those wounds can limit and restrain us if we let them. The scars from these wounds can bind. OR the wounds can teach us and give us wisdom. But we have to admit that we bear them. Resurrection is continuous with death and life before death.

And tomorrow is is resurrection and transformation. Another recurring image in the Easter stories is that the Risen Christ is hard to recognize. Obviously resurrection is more than/different from the mere revivification of the crucified body of the man Jesus. There is something transforming about it. And let us all be honest. Most of the time we want revivification or resuscitation. We want the comfortable and the familiar to be brought back.

But as people of Easter faith our hope is in transformation. We don;t hope for the rebirth of what was but of the birth of God's New Thing. We hope for transformation of our churches, our communities, our world. And so we don't push for things to be "like they once were" but for new life to come in totally new and unexpected ways.

Unfortunately that hope is harder. But who promised that following The Way would be the easy path?
Posted by Gord at 8:58 pm No comments:

Open LEtter to the Prime Minister of Canada

Prime Minister Harper:
As I sit down to write this letter there are three things on my mind. One is the economic struggle in which Canada, and the rest of the world, finds itself these last several months. In fact my area of residence has been experiencing severe economic difficulties for around 18 months now. Another thing on my mind is the season. We are in the season of spring with its promise of new growth and rebirth. Along with this rests in my mind the story that Christians around the world gathered to tell just 10 days ago. The Easter story is one of new life, transformation, and the conquering of death. The third item on my mind is the fact that today is Earth Day, a day when we are challenged to think about the impact we have on the environment around us.

As I combined these three things this morning it occurred to me that they are related. Arguably the economic model under which we have been operating for the last several decades is dead, or at least mortally wounded. We need a resurrection so that we can move ahead. But a resurrection is not found by pumping money into the old model and attempting some sort of economic defibrillation. The resurrection many Canadians celebrate this season is the beginning of something new, of a transformed new life instead of a continuation of the old life.

And so I am writing you to encourage a new perspective on economic stimulus spending. Rather than funding industries and businesses under formulae around jobs created/saved or good return on investment I encourage your government to fund industries and businesses based on their commitment to a new way of living and working. In the context of Earth Day I urge that all governmental grants go to companies pledging to operate under strictly “green” conditions. There are many ways I could see that happening.

It is my belief that the old economic model is deadly to our well-being as people and the existence of the planet. But I believe life is stronger than death. I believe if we are willing to embrace transformation great things can happen. Canada can become a leader in the development of a green economic model. All it takes is the will to make it so.

Thank you for your time.
Peace,

THere is more than one Christian voice!

THat is the "discovery" made in this article.

What might be surprising to many Americans is the existence of a large number of Christian clergy who are liberal-minded, politically engaged, and eager to be more involved in public debates on social justice issues.

Surprising to whom? Those who think the only religious voices are the strident voices of the extreme? THose who think the media covers all religion and not the loudest, most spectacular voices?

Most of us in the mainline churches knew this already. Nice to see that someone agrees with us.

Hat Tip to Tripp who posted the link on FB
Posted by Gord at 7:14 am No comments:

Email ThisBlogThis!Share to TwitterShare to FacebookShare to Pinterest
Labels: In the News, media

Death's Victiory has been DENIED!
Where the world said NO God has said YES!
Christ is Risen!
Christ is Risen Indeed!
HALLELUJAH!!!!
Posted by Gord at 7:04 am No comments:

A Word of Warning

It is a call to action, a call for an active itinerant faith. ANd possibly a call to revolution
Posted by Gord at 8:28 am 1 comment:

Email ThisBlogThis!Share to TwitterShare to FacebookShare to Pinterest
Labels: theology

They thought they had won. The one who had threatened the status quo was dead. His broken body hung there on that cross by the gates between two other troublemakers. Such was the penalty faced by all those who dared challenge the powers of the world. This was the penalty paid by that rabble-rouser, Jesus of Nazareth.

Of course that isn't where the story ends. But in order to truly appreciate the end of the story we need to stop and honour the death. Easter glory is meaningless without Friday gloom.

And the reality of Friday is that Jesus, the man from Nazareth who preached and taught about a new vision for the world, who proclaimed the Community of God was killed. Stripped of all the layers of meaning (some would say baggage) theologians have added to this death over the centuries the reality is this. Jesus challenged the social structures and oppression in his world. Jesus proclaimed an alternate kingdom to the empire of Rome. And so he died convicted of sedition. His death was political, not religious (if the two could possibly be separated). Like so many thousands of other “enemies of the state” he was executed in a public display of Imperial might – a warning to those who might follow him.

And so those in power were sure they had won the day. The powers of death had triumphed as they so often do. Might makes right after all.

But God had a different answer. God's answer is that the powers of death never win in the end. They may take the battle but never the war. So God says yes to Jesus. God says YES to life. And when the women go looking for Jesus of Nazareth, the one who was murdered, he is not there. He has been raised. Life has conquered death and we are pulled from the fear of death into the hope and promise of new life.

This is the glory of Easter. Life wins. The reality of the world is that too much of the time we see the gloom of Friday. Too often we see the oppressors win and God's justice gets tossed by the wayside. At best we live most of our lives in the in-between world of Saturday, caught between the gloom of cross and the glory of new life. But if we keep our eyes and hearts open, if we let the spark of hope continue to glow within us, then Sunday's dawn will find us singing praises.

This Easter we have a choice. We can get bogged down in arguments about what really happened 2000 years ago. Or we can ask what truth the story tells us. I choose the latter. And the truth I hear is the great message of hope. In God's plan death has lost its sting. Life conquers all. Alleluia!!!

WOrds fail to describe this:
The Passion Narrative According to Facebook
Posted by Gord at 6:13 pm 3 comments:

It's Been A LOOOOOOOONG Hard Winter...

Earlier this week I went to check the yard and this is what I found: 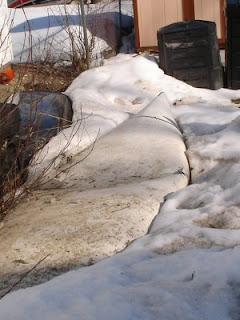 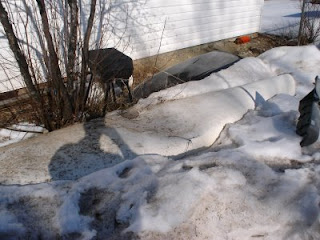 Apparently the snow weight was too much for the canoe this year. Once the snow all melts we'll evaluate if it is repairable. If not, I guess we know what our "Tax Return" purchase will be this year.
Posted by Gord at 4:05 pm 3 comments: