We see them all over the place.  Crosses stuck in the ground by the roadside, flowers taped to a lightpost, piles of stuffed animals intermixed with votive candles.  Ways to mark places that people have been killed in traffic accidents.

And whenever I see them I have to ask myself what they say about how we as a society deal with grief.

They are, after all, a fairly new phenomenon.  How did we as a society deal with grief before?

SOme would suggest that the movement away from a strong faith presence in people's lives, a presence that gave us more tools to deal with death and dying, has left us less able to deal with these tragic events.  But I think that is, at best, only partly true.

I think that another, larger, part is that we as a society simply have, to a large part, our skills and knowledge at dealing with death in general.  In our societal attempt (often subconscious) to deny the reality of death we have robbed ourselves of the ability to talk about grief and death openly.  ANd so it comes out in these ways where once it would have been limited to rituals such as worship services or wakes and the memorial site tied to a cemetery plot.  BUt in a society that denies death, who wants to go to a cemetery?

Last weekend 4 young men in this community lost their lives in a traffic accident.  And now the community is trying to find the best way to honour their memory, name and express their grief, and try to find a way forward.  I am sure that the church has a role to play, somehow.  WE have the tools that help find meaning when life makes no sense (maybe not right away but over time).

And in the end, the path to healing and meaning and light aren't found in a cross or flowers by the roadside.

But first we have to give ourselves permission to grieve publicly and heathily,.  Which of course means we have to get back to acknowledging openly and realistically the reality that death happens.  Death happens sometimes after a long life, and sometimes suddenly and too young.  Life is not fair, at least not all of the time.  When we can do these things we will be healthier for it.
Posted by Gord at 9:56 pm No comments: 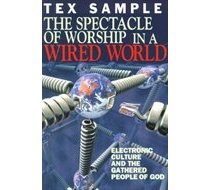 I heard Tex speak at a UCCan event in 2002.  I remember being, on the whole, underwhelmed.  What he was saying about worship planning was meaningless in the place where I was then serving.  ANd beyond that, even for what did have value his solution was totally unreasonable and unworkable [as I remember it was along the lines of "blended worship doesn't really exist, traditional worship doesn't work for younger generations, so the only answer is to start a second service"  in a town of 3000 with an average attendance at Sunday worship of 40?].

However, this book was in an area that I have been wanting to look at and so I picked it up.  (well that and over the intervening 9 years I had forgotten my reaction to hearing him speak)

It had some valid points.  But on the whole I did not find it compelling.  At the end of the book he describes what he calls a worship service.  But to be honest I read a description of a production/performance -- not a worship service.

Worship is, and always has, at least partly spectacle.  And there is a need for those of us in the church to explore what role the electronic culture of TV, Rock music, Dance, Social Media etc can play in our public worship.  But Sample seems to go more into embracing it wholeheartedly than I am comfortable with.
Posted by Gord at 7:51 pm No comments:

Waste Reduction Letter to the Editor

So this is National Waste Reduction Week!
Great, but I have to ask if we are doing all we can to promote actual waste reduction. In particular I am wondering about these massive garbage cans we were all issued last year.
We spent over half of August in another community this summer. They also revised their garbage collection this past year. And they did it better. Residents their had a chance to choose how big a garbage can they wanted: the size we have, half that size, and a quarter of the full one. And if you chose a smaller can then you paid less for garbage collection.
And yet here we were all given a garbage can that many people find way bigger than they need. We have four children. In a normal week our can is less than half full. Even if our 1 year old was in disposable diapers instead of cloth we would not come close to filling that massive can. We would jump at the idea to have a smaller can, or to do the other thing I noted done elsewhere (arguably for cost savings as much as waste reduction)--garbage collection every second week.
I applaud this community for moving to curbside recycling. I celebrate that we can put yard waste at the curb for pick up (although it would make more sense to have bins for that instead of all those plastic bags) instead of mixing it in with the garbage. I just wonder if we, as a community, could do more to push waste reduction. Great big garbage cans don't encourage waste reduction, but smaller ones definitely would. Especially if we got to pay less if we produced less waste.
Gord Waldie
Posted by Gord at 3:11 pm No comments:

40 Years is Too Long

Yesterday a new premier was elected.   She is the 4th PC premier of Alberta since 1971.  That makes 40 years of uninterrupted majority government (at times virtually 1 party government since the opposition was so small).  A friend of mine once commented that Alberta elections reminded him of elections on the former USSR -- anybody was free to run as long as it was understood that the party would win.

It doesn't matter what party it is.  It doesn't matter if I vote for them or not.  40 years of government by one party is not healthy for that party or for the jurisdiction they govern.  SOme will point out that the PCs have held the dynasty by reworking themselves from time to time as the context changed (the most disastrous in the minds of many (but not all, and obviously not a majority) being in the 1990's when a strong fiscal conservatism took hold.

But after 40 years it is not easy to form a new government.  So when will the change come?  And who might be waiting in the wings to take the reins?
Posted by Gord at 10:45 pm No comments: