Let me start with a very clear statement.  It is my belief that in the vast majority of cases (95%+) homeschooling is not the best option for the good of the child or for society at large {remembering that part of the basic reason for public education is that it benefits society by creating good citizens--whatever that means}.  I do not think it should be outlawed because there are instances when it is the right (or possibly only) choice but it should be subject to quite stringent guidelines and oversight.  I just wanted to name my bias from the start.

Currently the province of Alberta has a new Education Act before the Legislature.  Within the act is language discussing how the Alberta Human Rights Act interacts with the educational system, including those who choose to home-school.  And this has caused some distuption because parents feel that their rights to decide what their children learn (particularly among the home-schooling crowd but to a lesser extent with parents who want to object to/have their children excused from portions of what is taught at school) are being infringed.  Today there was a protest on the steps of the Legislature Building (story here or here).

Well yes, because heaven forbid we require that every child in the province is taught in a way that upholds the human rights act.  Yes that means you have to teach them that different religious expressions have the right to be expressed and that information about them presented as if they were valid.  Yes that means you have to expose your child to accurate (and potentially life saving), if uncomfortable, information about human sexuality.  Yes it means that your own biases may have to be counterbalanced on some issues.  And yes, in my opinion that is a valid limiting of your parental rights in favour of the general good of society.

AS it happens we are about to go into a provincial election so this could become an election issues, depending on whether the bill passes before dissolution.  Here is the far right party's (IMO misguided) take on it.  When it comes down to it, the province giving in on this issue does not further the cause of education in this province.  In fact it weakens the idea that there are certain things that we believe EVERY student needs to learn.

I truly hope that the government does not give in on this one.  Mind you I also believe that every student in this country, as a condition of receiving his or her high school diploma, should be required to take at least one year of comparative religions/world religions.  I also believe they should be required to travel, by land (probably rail) from coast to coast as a part of their high school education.  SO what do I know.
Posted by Gord at 7:26 pm 1 comment:

Email ThisBlogThis!Share to TwitterShare to FacebookShare to Pinterest
Labels: In the News

In chapter 8 of  For The Love of Cities (see previous post) Peter Kageyama talks about the importance of co-creators in creating lovable cities.  For much of the chapter he discusses two cities (New Orleans and Detroit) that have been decimated in recent years, almost to the point that one could honestly wonder if a come back was possible.  {and in the case of NOLA it seems reasonable to ask if making a comeback in that particular location is a truly good idea anyway--history aside}.  NOLA was of course devastated by a single day.  But there are signs of people making a big difference in that city.  Detroit was the victim of "death by a thousand cuts" rather than one event.  But after the crash of 2008 and the bottom falling out of the auto industry ithe city's decline became most evident.  And there too people are making a difference.

Kageyama points out that in cities like NOLA and Detroit it is alomost easier for co-creators to make a real difference--simply because they are fish in a smaller pond.  But he also points out that there is a big difference.  People in NOLA know that a total rebuild is needed.  People in Detroit maybe not so much.  On page 184 he writes:


If you talk to people in New Orleans. there is a sense that they are on a mission.  And that perception is reflected in public awareness.  The small group of co-creators I have met in Detroit are also on a mission, but that mission has yet to be understood across the city.
Dan Gilmartin, Executive Director of the Michigan Municipal League said to me, "Many of our leaders are trying to recreate the economy we had here in the 1950's and 1960's.  They still believe that is possible.  And until we break from that thinking, we cannot move fully forward."  Gilmartin is representative of many up and coming leaders who are battling with decades of tradition and industrial era thinking.

While I already thought that there was much in this book that applied as much to the church as to cities, this sunk it for me.  HOw many of us who are leaders in the church have run into what I once heard someone call "Golden Era Syndrome", that belief that we can return to what once was [note that it is my belief that GES also involves a whole lot of false or selective memory which blinds us to the flaws of that time].  There is a belief that if we just do something, or some set of things we can recreate the church, or the economy, or the community that we had once.

Of course it is not that simple.  Things have changed.  Detroit will never be what it once was.  It may avoid becoming a Robo-Cop world.  It may rebuild itself.  But it won't be that anymore.

I lived for 9 years in a community that suffered from the same problem.  There was a recurring desire to bring in the next big project that would employ hundreds (at high paying jobs) and bring the town back to what it was when the mines were running {currently that community is banking on a proposed gold mine, although it has a lot of work to do if it hopes to fully benefit from that project as this editorial points out}.  There was little appetite to hear those voices that pointed out that such mega-projects were more and more unlikely, that the town needed to find something other than rocks or trees as an economic base.

Currently that discussion is happening, to a large extent, throughout the province of Ontario.  That province was Canada's manufacturing heartland.  ANd as such it was, for many years, one of the two major economic engines of the country (the other being the oil industry, mainly centered in Alberta).  Now, due to a combination of factors, this is no longer the truth.  And yet the politics of the province tend to revolve around which party is going to bring those days back (the answer is none given that provincial/state or federal governments have much much less control over the economy than people like to believe).  There is less of an interest in figuring out what the next economic engine for the province might be and more in restarting the engine that has stalled.  A government which pledges to (and actually does) invest in new, risky, endeavours is called out for taking too many risks and spending money foolishly (especially when those risks don't pay off within the election cycle) when what they "should" be doing is investing in old-style mills/plants/factories. {Of course if they don't invest in new ideas they are then lambasted for that too -- sometimes government is a no-win propostition.}  And to a degree I understand.  THe new economy doesn't bring jobs that pay at the same level or the same number of jobs.  ANd we have led ourselves to believe that we can only survive with what we know.  After all change is always a challenge.

In our churches, the same thing happens.  New-style programming is looked on, all too often, with askance.  And that assumes that there are people with the vision of a new-style program.  Many of us are not naturally co-creators.  Many of us are not naturally people who can envision a whole new way of being the church.  But we need to give those co-creators room.  In our churches, in our community groups, in our cities, in our provinces/states, in our nations we need to give room (and possibly $$$$) to theose people who see a new way forward.  We can't go back.  The table has turned.  Which way are we going now?
Posted by Gord at 9:26 pm No comments:

A while ago I went to this event: 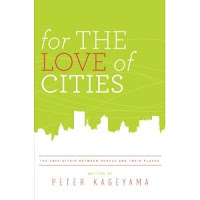 At the event I got a copy of this book.  It is a book I heartily encourage people in leadership positions in the church to read.  Why chuirch leaders and not just community leaders (who I also encourage to read this book)?  Two reasons.

One reason is that I believe that much of what Kageyama says about cities holds true for churches.  If we view the church as a community the we need to talk about what makes us love our churches -- and how to grow that love.

There was one line from near the end of the book that expecially struck me.  But it will get its own post.  Maybe tomorrow evening while watching the Brier final that post will get written????
Posted by Gord at 9:33 pm No comments: