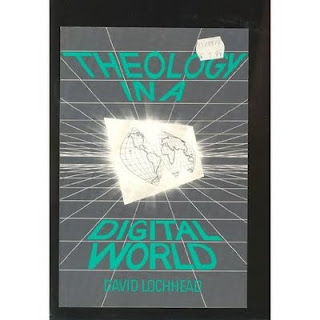 This one was recommended to me when I was musing on FB about doing a paper on the use of technology in worship planning and presentation.  (I may still do that paper some day -- when I have the time).

It is not a new book.  I had to order it used.  But what amazed me was how prescient it is, for a book written at the beginning of the Digital Age.

Lochead was, as they say, and "early adopter" of internet possibilities within the United Church of Canada.  He was in fact a pioneer of ECUNET back in the day.  In his intro he says that the first chapter came to form in 1984.  Now I remember 1984.  THink Apple IIe.  THink DOS.  THink those lovely green screens.  The only exposure most of us had to modems and inter-computer communication at that time was movies such as War Games.  In fact a decade later, when I was doing my first internship, modems and ECUNET/othe internet things and so on were still something very few people were doing (and a 28.8 modem was the top of the line).  ANd yet what Lochead describes is eerily accurate to what we have now.

THis was a good book.  An introductory book to be sure.  But a good read.  Lochead raises important questions that still need to be explored, especially as we live into the reality of a social media world.  Given that I am still mulling the concept of doing a DMin exploring what it means to be the church in a Digital World I am really glad this book was suggested to me.
Posted by Gord at 9:37 pm No comments:

How I spent Last week

LAst week I took two extra days off.  To get a project done while my "work crew"  (aka parents) were in town.

When we bought the house last year we had noted that the front yard needed to be regraded as it sloped in towards the house (and there was a gap of a couple inches between the bottom of the front step and the ground).  So we replaced the front sidewalk with a bigger one made of paving bricks and put nice big flower beds in to replace the 2 foot wide ones under the eaves. 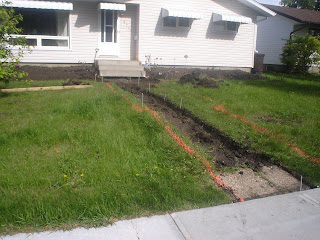 After day 1 of work 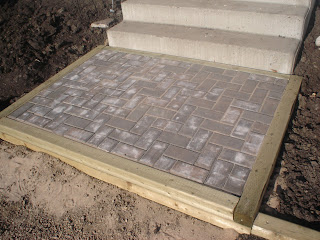 The raised section right at the step, also to show the brick pattern 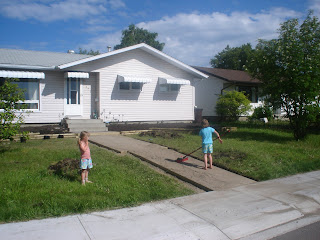 After completion (almost).  The sides have now been filled with sod clumps, soil and grass seed.  Now we just have to decide what all we want to plane in the beds (perennials and shrubs)

I know it is only June and the only month in which snow has not been recorded in Alberta is July but still... 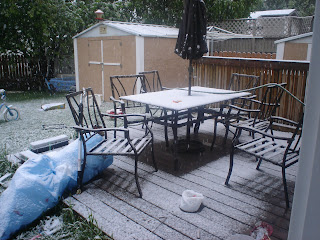 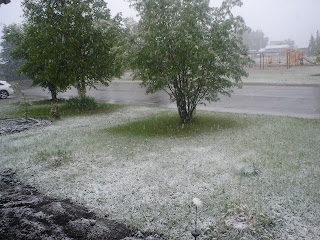 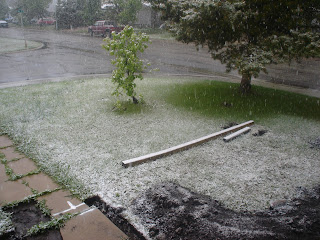