I have long been a history fan so when I first heard about this book I almost bought it immediately.  However, I had other things to do with my study allowance this year and was going to wait.  But I had heard a number of references to it in a couple of FB discussions that made it sound really worthwhile so I went looking for it...

It is rare I read a book and my response is to wish it was added to course syllabi.  This is one of those books.  I think it is essential reading for history of the United Church of Canada courses (and also that those courses are ESSENTIAL for anyone entering ministry in the UCCan).

Not that the picture drawn is always what we would like to see.  Airhart makes obvious the inherent racism/xenophobia that existed in the UCCan as they tried to face a Canada where Anglo-Saxon roots were becoming less and less a majority (note that this racism is also a reality in the history of public education in Canada and probably in many other parts of Canadian life).  She names the rampant anti-Catholicism that marked the Canadian reality for many decades.  This is part of who we were, part of where we came from.  And, just like we have forced ourselves (or been forced) to look clearly at our relationships with our First Nations brothers and sisters, we need to face some of those hard realities.

As we attempt to figure out where we are going, to try and guess where we will end up, it is helpful to look at where we have been.  In reading this it becomes obvious that the discussions we are having now about our identity have been happening and building not for the last few years but for longer than I have been alive.  Sure they have had different faces but they have been the same discussions.  For 50 years we have been trying to sort out what we are all about, because the founding vision at the time of Union is well and truly no longer viable.

I encourage all UCCan folk to read this book, all UCCan congregations should have a copy in the building.
Posted by Gord at 5:40 pm No comments:

He is Risen Indeed! 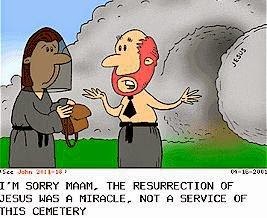