When the Watermain Breaks...

Around 9:15 this morning we realized we had a watermain break in our yard. These pictures were taken about 10:30 when the water was just being turned off 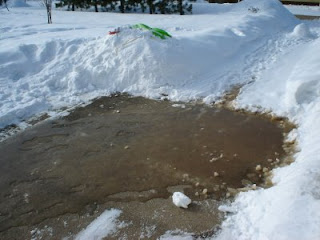 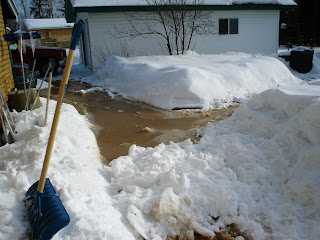 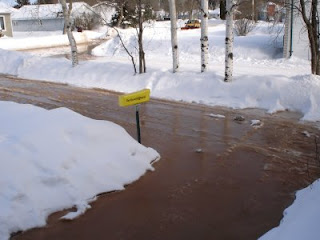 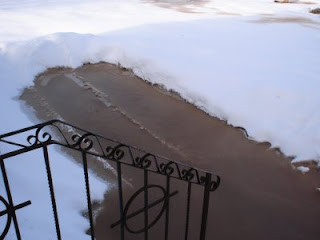 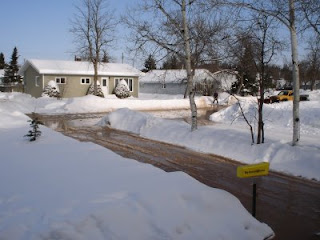 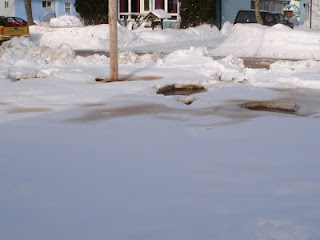 Moderator Speaks on the Economy

Last Sunday in his sermon David Giuliano said that he was heartsick about the financial situation in which the world finds itself. And as Moderator he was trying to determine what the church's response should be.

Well, he obviously came up with something. This post has the text of his letter to the church and a link to his letter to the country. Also it has a link to a Calgary Herald article about the letter. You have to love it when the Moderator writes a letter that the news media says describes the national economy as a "pyramid scheme"
Posted by Gord at 5:26 pm 1 comment:

Email ThisBlogThis!Share to TwitterShare to FacebookShare to Pinterest
Labels: Church Life, In the News

This mornign we celebrated the Transfiguration. And we were blessed to do so through the preching of the Right Rev. David Giuliano, Moderator of the UCCan.

In reflecting on the story David saw it in a new way for me. Rather than Peter wanting to build tents so they could all stay in that moment of transcendent glory. Maybe PEter wanted to build tents so that Peter always had a place to go and find that transcendent glory. AS DAvid noted, the tents were for Jesus, Elijah, and Moses -- Peter wasn't offering to bunk with "Mo".

David suggested that maybe that is what the church has done. HAve we built dwelling places for GOd, not to keep us in the space, but to keep GOd in a place? HAve we tried to tame and limit God and access to GOd?

I agree with David. I think we have. ANd in doing that I think we have lost lots. BUt God hasn't lost as much. AFter all GOd is not tamed. God just then may act through ways other than the church. THen the church has to figure out how to catch up.

It brough to mind a phrase often repeated in the Narnia books. Aslan (who is obviously the Christ in Lewis' story) is not a tame lion.
Posted by Gord at 3:28 pm 2 comments:

This afternoon as I was giving the combined theological reflection and chair's address (which appeared to be well recieved) I openly named that some thing I was saying was considered heretical by many in the UCCan.

What could possibly be heretical in as diverse and non-creedal a denomination as the UCCan?

The suggestion that maybe trying to consistently balance representation by a half dozen criteria gets in the way of getting the right people for the job.

Maybe getting the right people, people who are called and have passion for the work, is more important than ensuring a balance according to gender, and age, and geography, and lay/paid ministry status, and experienced/new. Maybe not. Maybe sometimes. BUt what if it means we put our agenda of political correctness ahead of God's agenda?

Oh and I also named aloud that our current congregations may not be currently sustainable. And suggested that the business of being "The CHurch" got in the way of God's busines of being the church. And wondered why in two days of meetings we never talked about the world outside our doors with its mill closings and lay offs and anxiety -- and then asked if we were serving God's agenda or ours.

2 years ago, as a part of the process of naming ourselves an Affirming COnference, we passed a motion that all Joint Needs Assessment Reports in this conference would need to respond to this question:

The United Church believes that God calls people of all races, ethnicities, abilities, orientations and gender to ministry. Are there any theological or physical factors that would prevent you from welcoming any such persons to your Ministry site? Please specify and include your rationale.

Certainly this is an important issue. ANd certainly people searching for new ministry locations will often want to know the answer to this (and likely explore it deeper). But are congregations who would answer yes allowed or encouraged to be honest?

We have in our denomination congregations that have passed marriage policy saying that they will only perform "traditional" (ie. not same-gender) marriages. How do they answer the welcoming question? Is there a tyranny of being seen as "open" that silences those who want to be honest about how comfortable someone might feel in their location? I honestly think that there is such a tyranny within the church. ANd even though I align on the side of openness and welcoming it is wrong to force people to pretend they are something they are not.

Or do they do as some have and name their marriage policy but then say there is no reason anyone in the above categories would not be welcomed, and seemingly not notice the inherent contradiction?
Posted by Gord at 7:20 am 3 comments:

FOr some reason I found this (wonderfully tacky) movie on my mind today. SO here are a couple videos:


ANd my memory of sex ed was never like this:

Email ThisBlogThis!Share to TwitterShare to FacebookShare to Pinterest
Labels: media

Lenten SEries-- The C's of Stewardship

Once I go through and decide on SCriptures (since I am guessing that the lectionary won't really fit) I'll post them too!

So did anyone catch the econominc numbers today?? YEEOUCH!
ANyway, over at RGBP SOngbird writes:

In a week of wondering how various things in our family life will unfold, I found myself thinking of the way Maria comforted the Von Trapp children in one of my favorite movies. Frightened by a thunder storm, the children descend upon her, and she sings to them about her favorite things, taking their minds off the storm.

So, let's encourage ourselves. Share with us five of your favorite things. Use words or pictures, whatever expresses it best.

OK, time to grow up!

By now I am sure many of you have heard that atheists in Britain have bought ads on buses that read "There's probably no God. Now stop worrying and enjoy your life". (really though that strikes me as more of an agnostic-leaning towards atheism ad than a stridently atheist one) And similar ads are being proposed in various Canadian cities. To what response?

And it appears that many people of faith (predominantly extreme and vocal Christians) think the transit authority are right. AFter all, we don't want to actually discuss if there is a God do we? OR heaven fordid admit that not everyone shares our beliefs!

I can only assume that people are not secure in their own faith if they think an ad on the side of a bus is a threat. Because believe me, there are faith-based ads on public transit all over the place already: "keep Christ in Christmas", anti-abortion messages (both of which are often sponsored by the Knights of COlumbus I have noticed), ads for specific churches/denominations, not to mention the whole faith of consumerism that sparks advertising in the first place. So it isn't faith-based ads that are controversial, only faith-based ads that challenge "the norm".

REally people grow up. Let's be open to dialogue.

PErsonally I prefer the UCCan response which is also described in this article:

In anticipation of the bus campaign, the United Church of Canada is rolling out an online response to the ad today and a national print campaign tomorrow.
The United Church ad, created by Toronto-based Smith Roberts Creative Communications, encourages readers to choose between the original message and theirs, which reads: "There's probably a God. Now stop worrying and enjoy your life."

That is much more like actual debate. That opens up to dialogue. ANd as of right now the vote on WonderCafe stands 54-46 on the atheist/agnostic side.


PS> in an oddly fortuitous coincidence, the cover story of the United Church Observer is about the rise of extreme atheism. You can read more here and here
Posted by Gord at 6:00 pm 2 comments: