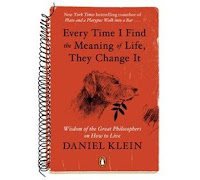 It is a collection of reflections on quotes from various philosophers, from the ancient Greek to a couple of Scripture passages, to 20th century folks.  And the author himself has studied philosophy and so has the ability to explain a bit about the school of thought surrounding the quote.

Some of the quotes are great, some of them leave me bleh. But there is something to think about in almost every quote and reflection.  And there were some I thought "I could use this in a sermon". I think this is a book I will use as a reference from time to time...assuming I remember which pithy quote I am looking for of course.
Posted by Gord at 10:34 pm No comments:

Whew, it will take forever to get this book finished (partly because I keep interrupting to read other things).

This volume was called "Marius".  As with other characters we have an in-depth introduction to him. We learn about his grandfather and his father. The father who served at Waterloo...who was  in that description many pages ago and met a scavenger named Thenardier.

WE learn how Marius meets the students led by Enjolras and are given a full introduction to each student.

We learn that Marius has a strong predilection for helping others, a charitable heart.  Then again it is obvious in this book that to be a heroic character one has a charitable caring heart

We learn how Marius first becomes besotted with this beautiful  girl whose name he does not know. And how he pretty much stalks her.

ANd then we learn that Marius lives next door to the Thenardier clan, and we watch with him as Thenardier once again meets an old friend.

IT is interesting reading.  But sooo long, and sooooooooooooo much detail that seems extraneous to moving the plot forward.
Posted by Gord at 9:51 pm No comments: