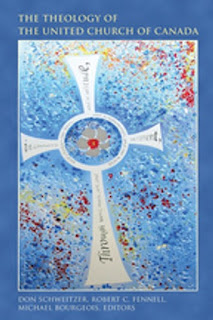 I was very excited when I saw advance news that this book was being released. Often those of us in the United Church have met with accusations that we have no theological principles, or that our theology is not "Christian enough" (we are a denomination that has been accused of being "Christianity Lite") or that we really just allow ourselves to get blown around by the winds of popular opinion. On the other hand an academic theologian within our midst has suggested that one of our issues, likely growing from our 'big-tent' reality and our practice of having theology and polity heavily influenced by local contexts, is that we are awash in theology.

At any rate this book is a systematic attempt to lay out what the United Church's theology is on a variety of topics and how it has developed. Each chapter is written by a different person and so there are a variety of points of view present in the book -- as is only appropriate for the United Church. Generally speaking the authors track the development of Theological thought through our 4 statements of faith that we term subordinate statements because our primary source for theology (whether some of my colleagues agree/like it or not) remains Scripture. When relevant they will also refer to other reports/studies/commissions that the church has produced since 1925.

Some of the chapters were more engaging than others (as one would expect). The chapter on the Holy Spirit, written by an indigenous person is a masterpiece. The chapters on Foreign and Home missions work were also striking in their willingness to name where the church grew in understanding of this cross-cultural work and where it remained stuck in very colonial attitudes for many decades.

The nature of the UCCan is that we do not always agree. And so there are interpretations here I found myself arguing with. (Again this may be part of why we are awash in theology because I am sure I am not alone.) However this is a book that needs to be widely read across the church  And plausibly hand delivered to some of our detractors, not to convince the we are right but to help them see who we are and how we got here.  In seminary I took a course called the History and Theology of the United Church. I think this volume would be a good reading for such a course, and then augmented by some of the studies and reports it alludes to.
Posted by Gord at 10:27 am No comments: