It was the summer of 1981.  I spent many hours in the local hockey arena (which would later be called the "Ducky Dome" after a mural featuring giant ducks was painted on the back but I digress).  We sang, we danced, we practiced lines, we were measured for burlap sack costumes (and oh were those itchy).  And when the time came a group of us waited in the bleachers for our cue.  When it same we marched over the boards and down a ramp singing "13 Mighty Dwarves" in this show.  And so St. Albert Children's Theatre was born.  Tonight (in about 45 minutes as I write this) in a special presentation they celebrate 30 years.  And if I were in St. Albert or somewhere else in metro Edmonton I would be there for the show and to see old friends.

In hte early years SACT was a summer program.  But then it grew.  First a spring show was added in 1984.  Then the summer show became a full camp that same year.  Not only did we prepare a show we took classes in music and dance and drama.  ANd by that 1984 summer the program was so popular the show was double cast (starting the summer of 1985 there were two separate summer shows, divided by age).

All in all I participated in 10 of the shows on the production history on the SACT website (although one of those was actually done as an A.R.T.S show [ARTS was a parallel program with many of the same members that was started as a leadership development program in the fall of 1982] Black Bonspiel of Wullie Macrimmon with WO Mitchell coming to meet the cast and crew).  SOmetimes I was in the cast, sometimes I was on the crew.  But the shows, as enjoyable as they were, were only part of the benefit.

The real benefit is that those people with whom I shared many hours in rehearsal and preparation and in post-show parties were my best friends throughout those Junior and Senior High years.  A few went on to do theatre as a career but most of us didn't.  But we supported each other, laughed together, struggled together.  And of all the people from those years they are among the ones I wish I had stayed in touch with -- although I have reconnected with some through FB.  Yes I developed skillls that a
have served me well in ministry, but the friendships were the really important part.  We were a group, sometimes cliquish, but we were a group.

Not bad for something my mom thought I might find enjoyable to fill the days of summer vacation.
Posted by Gord at 7:03 pm No comments:

A month ago, as we were doing some worship planning, the music minister and I decided that we weren't going to plan anything for Boxing Day.  After all, we reasoned, it seemed unlikely that we would have a big crowd.  So we decided there would be no bulletin, no structure.  People would be invited to sit up front beside the piano, we would ask for favourite carols, maybe some discussion about Christmas, coffee and tea and muffins available in the sanctuary....

And that is what happened.  There were about 20 folks present.  We had coffee/tea/muffins available (mind you nobody actually had any until after the service--force of habit I'd guess).  We convinced people, and it took some convincing, to sit up in the choir loft chairs. and here is the order of things actually happened:

It went well, in the opinion of many.  And may be the model for next year when December 25th is a Sunday
Posted by Gord at 8:06 pm No comments:

From Our House to Yours 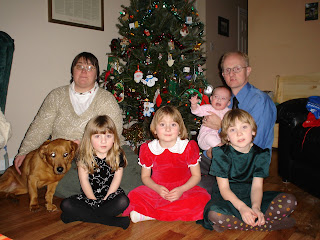 Merry Christmas!
God Bless Us Every One!
Posted by Gord at 10:32 pm 1 comment:

Email ThisBlogThis!Share to TwitterShare to FacebookShare to Pinterest
Labels: history

This Place is on my mind today.  It is the day of their annual Radiothon fundraiser.

I worked at the Kottage from November 1996 (started just before the Christmas PArty) until August 1999.  It was a gift.  It was a blessing.  ANd yes at times it was heartbreaking. ANd I still carry them in my heart (although most of the staff has undoubtedly changed by now and all the families I met there have children who have aged out of the program).

Why did folks call us? You name it: no food, housing issues, parental or sibling illness, death in the family, parental stress... And they were people who often had, or felt they had, no other place to turn. In my childhood we had close friends (in our case through the church) who could watch my sister and I on short notice if needed. In other people's stories this is what neighbours did.

But what if you are new to town and don't know anybody? What if you have no family close (or no family you trust/ are speaking too)? What if you live in an area that doesn't lead you to trust your neighbour's? Who do you call?

ANd here is a video (not the one I wanted, I wanted the whole song this one ends with) about their ministry.

So here is the question for you, fellow questers.  How do we, as people who believe in children and their parents, provide support when life falls apart?  How do we support the people who have nobody?
Posted by Gord at 3:13 pm No comments: 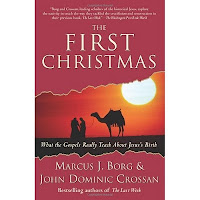 I have looked at this one a couple of times at book displays but never really wanted to buy it in Lent.  So this year I remembered in the fall and ordered it.

I enjoyed it, but then I fully expected to do so.  Not much in the way of new concepts for me, more of a nice summation of a non-literal (and also non-debunking) look at the Christmas stories.