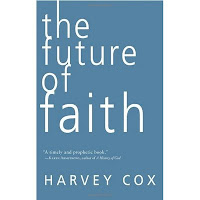 In this book Cox covers some of the same territory as Phyllis Tickle does in The Great Emergence (see entry below) but does it far better in my opinion.

Cox suggests, as have others, that Christianity is entering a new age, the Age of the Spirit.  However, where some use this in a Trinitarian way (following on from the Age of God and the Age of Jesus) Cox sees it as a time when the focus on creeds and othodoxy will give way to a renewed focus on faith.  Cox's paradigm starts with the early church in an AGe of Faith which gives way by the time of Constantine to an Age of Belief.  Cox also suggests that this development was a huge negative.  Cox is suggesting that Christianity is not about creeds or believing the right propositions but is about faith as trust or confidence.  (note that Marcus Borg also highlights the importance of this definition of faith within the Emergent church in The Heart of Christianity)

I liked this book.  I liked how Cox makes his arguement.  I am not as convinced that the North American church is as far along in the change as he seems to suggest but I see it as a real way forward.  ANd I found, as I so often do in books in this topic area, that he was decribing where I feel at home.  But of course as a person whose theology has always been far more pneumocentric than theo- or christocentric it only makes sense that I would feel at home in an Age of the Spirit.

I encourage the reading of this book.
Posted by Gord at 10:14 pm