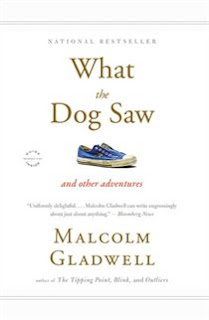 This has been my "read a chapter or two while relaxing in the tub" book for much of this year.

It is the 4th book of Gladwell's that I have read (the others have been [in order] The Tipping Point, Blink, and Outliers).  And I am still not sure what I think of him.  He does have a way of putting things that have often been taken for granted in a new light.  But he also tends (in this book which is a collection of essays) to appear to contradict himself.  Sometimes he does so in the same essay!  (admittedly that is a sign of good writing in my book, seeing as he appears to do so intentionally).

There is also a thread of small-c conservatism running through Gladwell's work (most obviously seen in The Tipping Point) such as the chapter in this book where I swear he was arguing that Ken Lay should not have been criminally charged for Enron that I find mis-aimed on some topics.

This was a very eclectic book.  It covers issues important and trivial.  For how I was reading it it was a good match.  But it wasn't something I would call a "must read".
Posted by Gord at 9:16 pm