What makes a place Sacred?  What makes it holy?  Why does it get set apart?

Sometimes Sacred Places have buildings on them, or the sacred place is in fact the building.  Sometimes they are natural spaces that have never had anything built on them.  Sometimes there is no building but humans have put a marker of some sort (Stonehenge or Native American Medicine wheels for example).  But there is something about a sacred place.

My Celtic ancestors used to talk about the thin place, which I understand as another way to describe a sacred place.  They are places where the Divine just feels more present than other places.  When enough people feel that a place is "thin" then it becomes more widely known and described as such.

But I think sacred places go far beyond the ones that have been culturally recognized.  I believe that we all have our sacred places.  We share some of them with others and for some they are only special to us, a closely guarded secret we hold in our hearts.

I visited three of my sacred places this summer.  As it happens two are on the same lake.

One is Rundle's Mission, a place that has had special meaning for me for approximately 40 years now.  As I was growing up we had congregational camp weekends at that place once or twice a year.  Over the years it became a very homey place to go.  When I am there, when I have time to wander around, I find peace, I know that I am with the Divine One.  I can't define it, but it is a thin place for me. 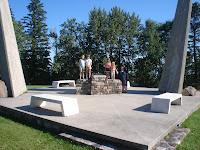 I have introduced the girls to it.  I know it will likely never be as special to them as it is to me.  They just don't have the history.  But I can tell them the stories.

Another is Camp Maskepetoon.  Just down the lake from Rundle's, a nice walk takes you from one place to another (indeed sometimes we would walk down to Rundle's from Camp--one year we took the whole camp down the road for a picnic).  I went there 3 times as a camper (1978, 1980, 1981).  But it really became special to me as a young adult.  I applied to be summer staff at the end of my 2nd year of university, got the job, and caught the bug.  Over the next 10 years I would end up being on staff for 5 summers and spend 3 years on the board (during those 3 summers I spent most of my days off out at the lake).  A holy and special place indeed.  It was there that I first felt what became known to me as the call to ministry.  It was there that I started to develop my adult spiritual self.  Without that place I would not be the person I am today.  When I go there I feel God. 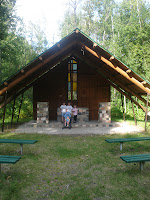 And this one the girls, at least the older two who have gone as campers, have started to share with me.

The third is the church of my childhood.  Well technically now it is the sanctuary of my teens and young adult years, the sanctuary of my childhood has long since been redone, changed into the Friendship Hall as part of the 1983/4 expansion--and I have no picture of it as it once was.  This is the congregation that nurtured me, that helped/watched me grow.  We started attending there when I was 2.  There I started teaching Sunday School, there I learned what it meant to be church (both positive and negative). 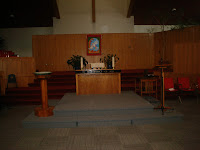 When I am there for worship, as I do most times I am in town on a Sunday (or a Wednesday in the summer) I feel at home.  Yes the congregation has changed much in the 20 years since I was an active part of its life.  But still I am home.  And God is there with me.

Of course there are many other places.  Cemeteries (pretty much ANY cemetery) are a thin place for me.  I can spend hours wandering around looking at headstones and drinking in the ambiance.  And the odd thing is that some places can be "thin" one day and not the next.  So it is sometimes hard to know what makes it thin.

What are your sacred places?  Why are they holy?  What makes them special?
Posted by Gord at 9:26 pm