(post back dated to when the book was actually finished)

High on my list of favourite movies is The Princess Bride--even though it is a movie I never saw in the theater, the first time I saw it was after it was released on VHS (I had friends in 1987 who went to it several Tuesday nights in a row though).  As in there was a time when I could say whole sections of dialogue as I was watching it (haven't watched it frequently enough for many years to do that as well).  Strangely none of the other 5 people with whom I live consider that something to boast about.... 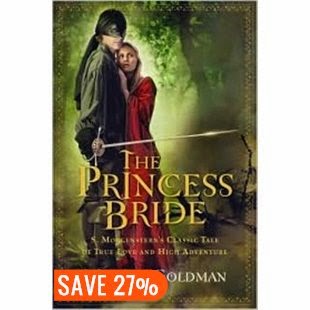 And so when my daughter saw this book in the store just before Christmas she was insistent that this was the perfect Christmas present for dad.  And was so excited she could hardly resist telling me what it was over the next week.

IT is always interesting to compare a novel to the movie.  Often I find I prefer whichever medium I first met the story.  If there is an exception it will be to prefer the novel, and generally because it first existed as a novel -- novelizations of movie scripts don't come off so well in my opinion.

The parts of this novel that are the actual telling of the story are very good.  This literary device of the abridgement of the "historic" story originally written by S. Morgenstern just feels odd.  But as always the beauty of a novel is that your brain can fill in the picture.  The difference here is that the parts you get to picture are the parts that are not in the movie--otherwise (especially when it is one of your favourite movies) the only images in your head are the ones from the movie.

I would never have bought this book for myself.  But I have thought about it more than once when seeing it in a bookstore over the last 27 years.  I enjoyed the read.
Posted by Gord at 9:03 pm