This looks terrible, beginning of March and I have only finished one book.  To be fair a good part of my time from January 10 to February 9 was spent reviewing material to prepare for the meeting that created this report. Well that and I have made great strides in Candy Crush.... 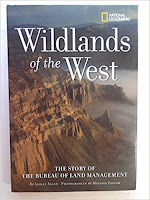 At any rate this was a Christmas gift. It is a National Geographic product and so it has some wonderful photos in it.  I know not everyone likes National Geographic's editorial approach but it can not be denied that they get great photos (I am sure there are dozens that don't get chosen for each one that is).

I had heard of the Bureau of Land Management but did not really know what is responsibilities were. I would not say that I have a full understanding of the their work but this did give a picture. I also found that Allen gave a good stab at trying to lay out the difficult line between conservation and utilization (though it is apparent that historically the balance has been to preference utilization over conservation). Given the current occupant of the White House it would be interesting to learn what the priorities of BLM have become now, given that there had been more of a move towards conservation over the last few decades.
Posted by Gord at 9:12 pm