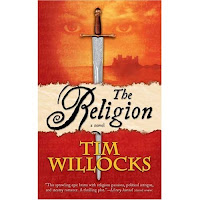 This was an impulse buy since the book I was looking for (and subsequently found elsewhere, may finish it tonight) wasn't there.

Set on Malta during the siege by the armies of Suleiman in the 1500's it is more than a little violent in parts (and gory). But not overly so, it would be unrealistic to set a novel in the midst of a fight to the death and not have violence and gore.

Mixed in with the fighting is a love story, some lessons on true honour, a search for a long lost child, and friendships. Not to mention the presence of the Inquisition and the main character who can (and does) operate freely in both Christian and Muslim camps.
Posted by Gord at 1:09 pm