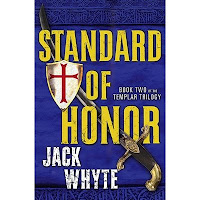 I have been waiting for this to come out in paperback since I read the first book in the Templar Trilogy last winter.

My previous reading on Whyte had been his Dream of Eagles series (although it appears there have been more books than I have read) which recounted Britain between the withdrawl of the Legions and Arthur.

THis series begins in the First Crusade when a group of knights from a secret brotherhood forms a group that will become the Knights Templar. ANd then they dig beneath the Temple Mount to find, not the Holy Grail, but a vast treasure left behind by their ancestors, who were members of the "true" Jesus movement (as opposed to the Church which they see as a Pauline misreading of Jesus). A nice mix of history and fiction. This book is the time of Richard Lionheart and the Third Crusade and it seems the third volume will be set at the time of the squashing of the Templars.
Posted by Gord at 6:10 pm