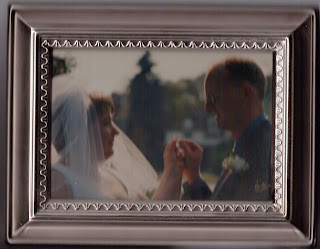 This picture was taken 10 years ago today -- before the actual wedding!  If they weren't in a box downstairs I would dig out the better ones--like the side view of me couched behind Patty holding the veil so it wouldn't blow in her face (slightly windy day up in Hillcrest Park) or the one taken at the church between pictures and service of Patty wearing an apron as a bib as she had a hamburger.

10 years, 4 daughters, a neurotic dog and a move across the country later she still puts up with me!  Happy Anniversary beautiful! 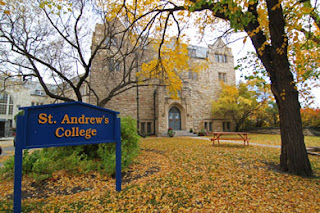 I had just moved to Saskatoon a week earlier, and was getting ready to embark on the next adventure.   Time to start studies at this school.  And it only took me 9 years to finish that!  (admittedly there were a few other adventures and a side trip or two along the path).

mmmm, What adventure shall we start this decade???   A new degree maybe???
Posted by Gord at 8:05 pm