The Intention was to post this on Thursday but... 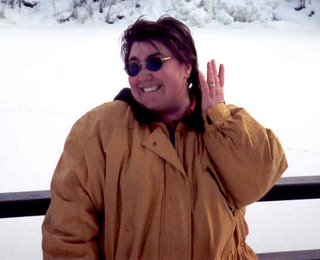 Four years ago, March 16, 2002, I asked Patty to marry me. Despite the fact that she had been waiting/hoping for this for a while I was still able to surprise her.

The night before we had gone out to supper at a couple's who live on the lake. After the fact she told me that she was convinced that I would propose that night, when I didn't she thought it wasn't going to happen. Anyway, I had it all planned out differently.

We drove out to Little Falls and wandered around for a while. I had the camera and said something about a picture on the bridge. We got out there, I got the ring out and said how great the last 6 months had been (our first official date had been the day of my Convenanting Service-October 14-and we had met two weeks previous to that) and held out the ring. Dead, stunned silence. Then a big grin.

We went for supper afterward then back to the manse to make the requisite phone calls. Worked out that it was a Saturday and then we were able to announce it to the congregation the next morning without needing to try too hard to keep it quiet beforehand.

Thanks for saying yes sweetheart!
Posted by Gord at 2:01 pm